After 12 shifts in 18 years, the Low Volume Vehicle Technical Association (LVVTA) finally has a permanent home.

The incorporated society has, during the past year, purchased a building in an industrial area within Porirua City, and reconfigured and refurbished it to meet its long‐term needs. “We have quite specific needs” says LVVTA CEO Tony Johnson. “For some time, as our responsibilities to the hobby, industry, and Government have grown, and as we’ve built up our Wellington‐based team, we have found ourselves needing many things; ‐ a spacious office area for our team of six, a meeting room, a large training and conference facility, a showroom, and a large factory area for vehicle inspections, archive storage, and a test rig that we want to design and build at some stage in the future.”

The 600 square metre building has been completely custom‐built on the inside and undergone a major overhaul on the outside, and it is obvious when looking through the building that the LVVTA team – who designed every aspect of the fit‐out themselves ‐ are lovers of cars and things mechanical; ‐ old New Zealand motoring signs and posters grace the walls, door handles are made from ring and open‐end spanners and aluminium con rods, and those who have made their mark within the LVV system are recognised within a new Wall of Honour, with a special Honours Board also for those who have served on the Technical Advisory Committee.

LVVTA celebrated the completion of the building with a formal opening ceremony on November 23rd, and guests came from around New Zealand, comprising Government officials, LVV Certifiers, motor industry organisation representatives, and those involved in the building project. Guest speakers included Jim McDonald from NZTA, the late Bruce McLaren’s sister Jan McLaren of the Bruce McLaren Trust, and SoCal Speed Shop’s Pete Chapouris. Pete, having spent time learning about LVVTA’s system from Tony Johnson during his visit to New Zealand, spoke about the quality of the NZ LVV certification system, and the need for a similar one in the USA. High praise indeed.

Steve Keys said during the ceremony that “LVVTA is here for the long haul, and never sits still. Despite already being regarded as the best vehicle modification and construction certification system in the world, we remain committed to constantly improving it. This building will enable us to keep lifting our game, and do the many things we have planned for the future.”

A highlight of the event was an acceptance speech from Richard (Dick) Reynolds (ex Vehicle Standards Controller within the Ministry of Transport) – an inaugural recipient of the LVVTA Wall of Honour – who spoke about the early negotiation days between himself and Tony Johnson starting back in 1989. Dick’s speech was an interesting insight into how the early negotiations went between his department and Tony and his colleagues during 1989 to 1991, and how the basic concept of ‘self‐governance’ and a lot of persistence on the part of Tony and a handful of enthusiasts evolved into the beginnings of the LVV certification.

The other three inaugural recipients into the LVVTA Wall of Honour were Andrew Justice from the Ministry of Transport (awarded posthumously and presented to his wife Libby), Ian Snellgrove (long‐time LVVTA Management Committee member and great advocate of setting aside some funding for a building one day), and Glenn Johnston (past LVVTA CEO). Tony Johnson was recognised also, when Steve Keys, LVVTA President, unveiled a plaque dedicating the new building in Tony’s honour for his outstanding contribution to LVVTA.

The opening marked a big step forward for LVVTA, and perhaps a coming of age for an organisation that is often said to consistently punch well above its weight. Most importantly, the new building provides a great environment for its hard‐working team, and it will allow the LVVTA, as an organisation, to work more effectively. It now has on‐site assessment facilities, a national certifier training facility, space to house its own records, and to move forward with its long‐held plans for a testing facility.

Pictures from the Opening Ceremony 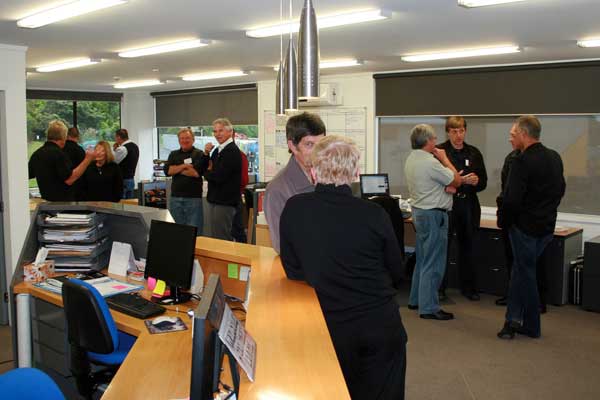 Above: A spacious and light work area for the LVVTA team at last. 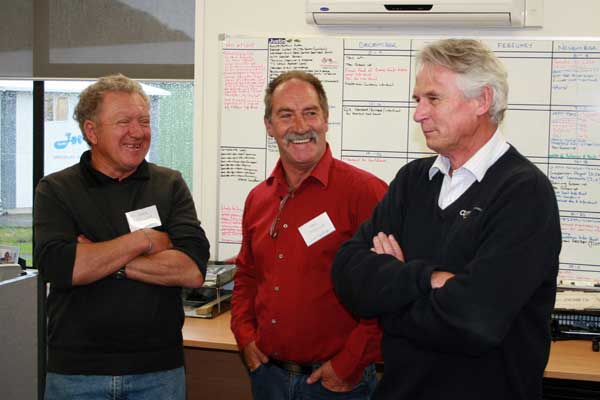 Above: These three were there from the beginning over 20 years ago; Errol Uttinger, Noel McMillin, and Daryl Gates. Noel McMillin (middle) is still an LVV Certifier in Hamilton. 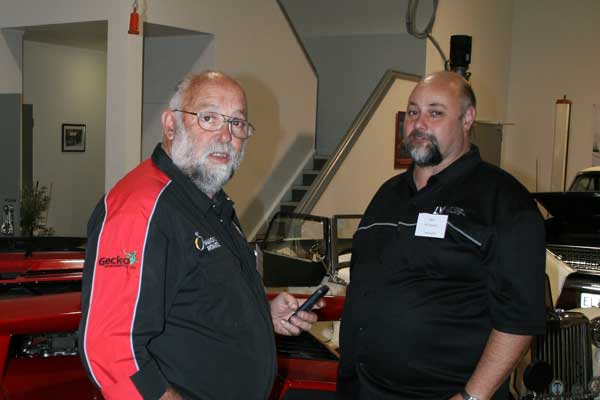 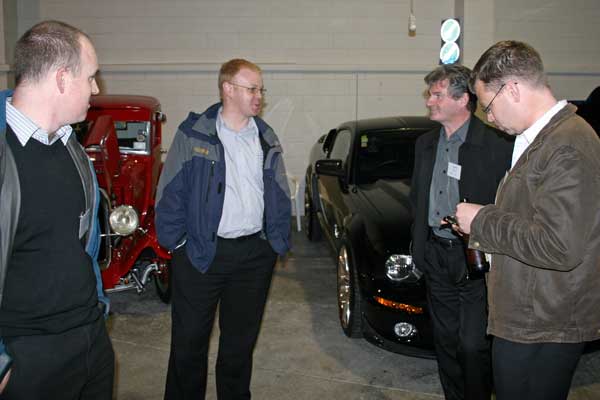 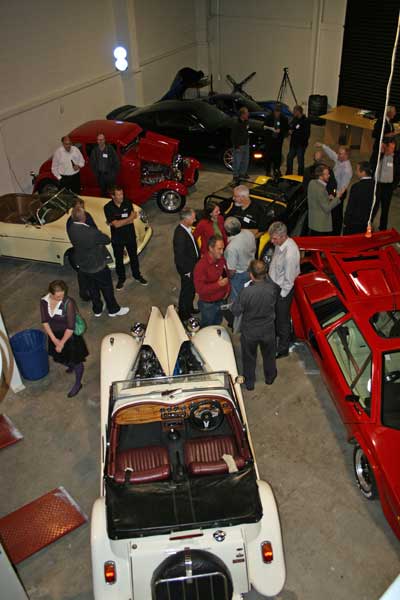 Above: A small 12‐car indoor display was provided in the LVVTA’s warehouse area for the benefit of the 80 or so opening ceremony attendees, which provided a focal point during drinks and nibbles once the formalities were completed. 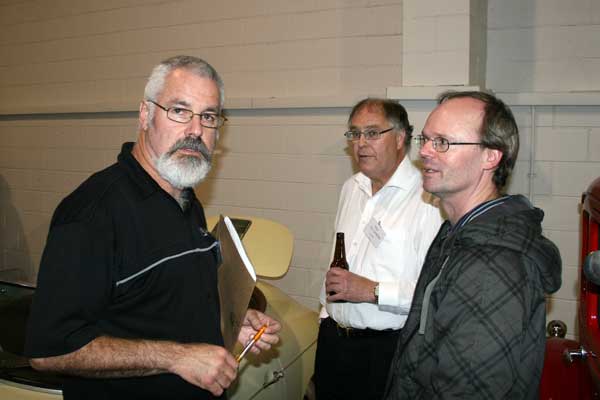 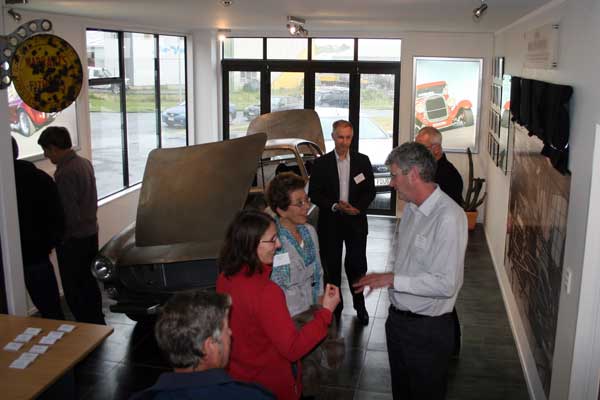 Above: Various guests in the showroom area, including Tanja Luckow (red top) Barbara Bibby (centre) and Andrew Hilson (white shirt). Centre rear is Mark Frampton from the Ministry of Transport. 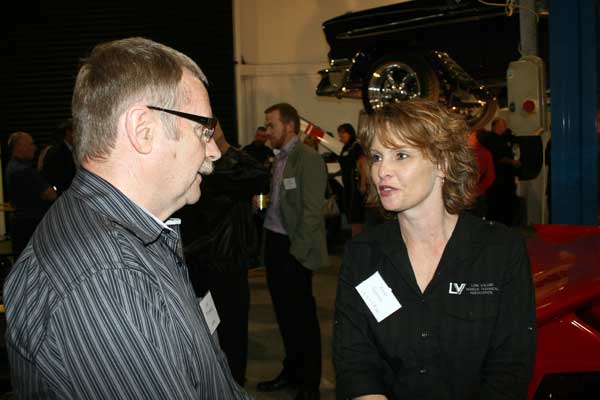 Above: Jim McDonald from NZTA talks to LVVTA's Nikki Thomas. 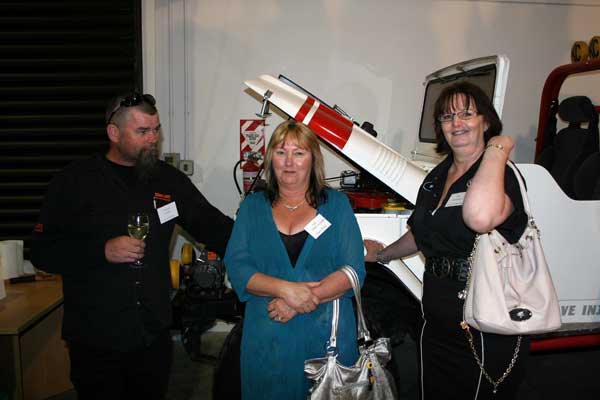 Above: From left: Julian Cheer, LVV Certifier (Carterton), and wife Tina, and to the right is Sue Russell, wife of Wellington LVV Certifier Mark 'Junior' Russell. 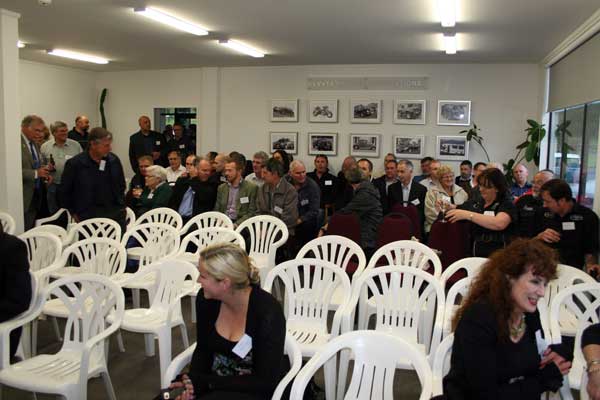 Above: The conference and training room was full to capacity for the opening, this picture shows it still less than half full. 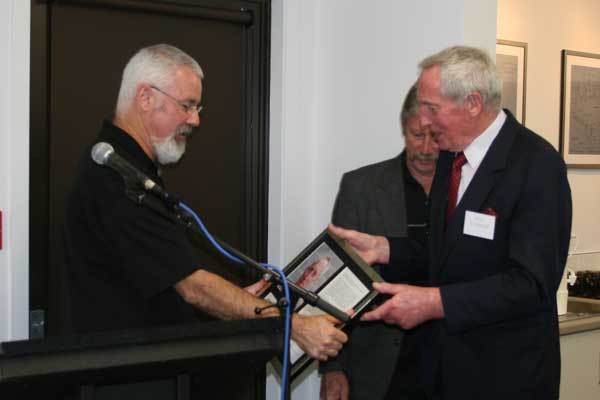 Above: Richard (Dick) Reynolds provided an insightful and entertaining acceptance speech, and is pictured here accepting his award by LVVTA CEO Tony Johnson. 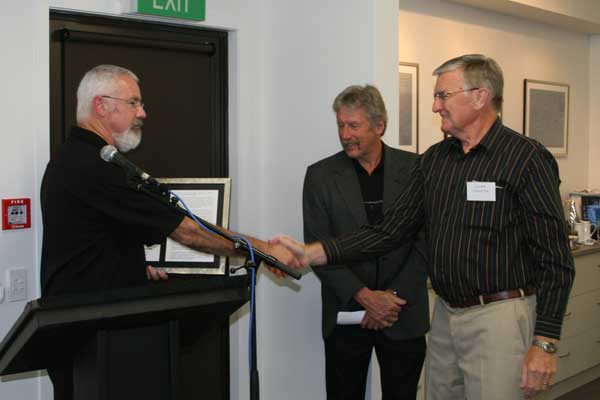 Above: Past LVVTA CEO Glenn Johnson receives his award, and induction into the LVVTA Wall of Honour. 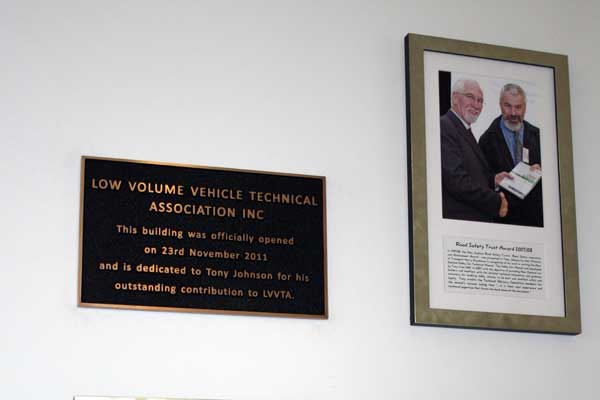 Above: A fitting tribute to the man who's done so much; the plaque dedicating the new LVVTA building to CEO Tony Johnson in recognition of his outstanding contribution to LVVTA. 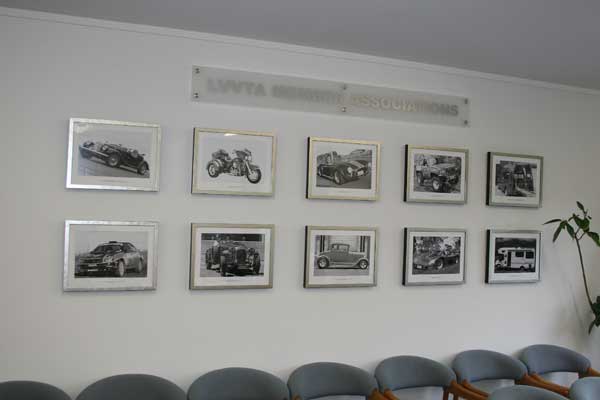 Above: One wall in the conference and training room is dedicated to the ten LVVTA member associations. 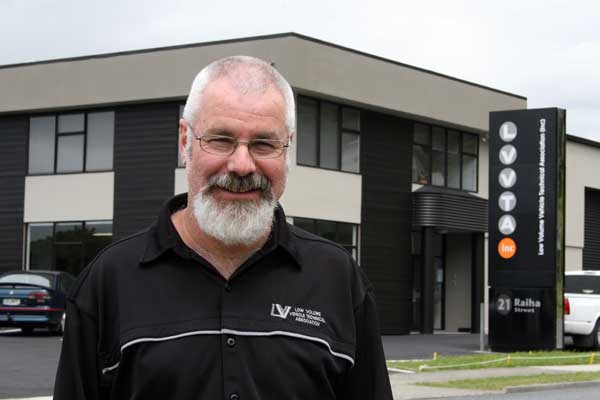 Above: LVVTA CEO Tony Johnson with the newly refurbished building in the background. The building purchase and  the fit-out that followed was a big task, however it's been well worthwhile in providing an ideal base for all LVVTA operations.